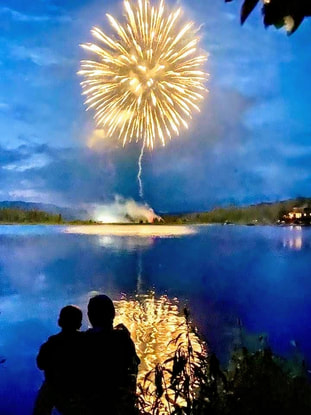 ​There’s something about explosions and fiery bursts of color in the night sky on the Fourth of July at Joe’s Pond that's hard to resist. It’s thrilling to watch, whether from a screened-in porch at water’s edge, a boat drifting under the canopy of pyrotechnics, or from a deck chair in the back of a pickup truck parked on a nearby hill. Hundreds of people look forward to it every year. It's tradition; but until the 1960s, the Fourth was celebrated by individuals with a few sparklers, or by setting off strings of firecrackers or sent an occasional rocket screaming out over the water. Then someone suggested consolidating efforts for a larger display.

The first donations for organized fireworks at Joe's Pond were collected in a jar at Hasting's Store in West Danville and were set off at the LaGue and Chatot camps on Sandy Beach Road. There was a loose permitting process at that time, and in 1965, with liability insurance expenses, about $200 was spent. Ralph Hastings and Earl Larrabee were in charge of setting up the display.

Most years were trouble free, but in 1972, soon after the fireworks display began, a dense fog enveloped the pond, obliterating the show. There were hisses as the cannons and torpedo flares were set off, then booms and bright spots in the fog when they exploded, but the effects were lost in the gloom. The greatest excitement that year was for boaters trying to find their way home in the fog. Since then, there is always an alternate or rain date in case of bad weather, and a set time limit for when to "call the show due to weather."

The Department of Transportation, in1974, passed new regulations on transporting fireworks over public roads, and that prevented Joe’s Pond Association from procuring fireworks that year. At the Association's August meeting, it was voted not to promote fireworks "for the foreseeable future." However, there was such disappointment within the community, it was voted in 1975 to resume the display and spend $1,000; but spending that amount of money didn't sit well with some Association members, and fireworks displays were again suspended when donations fell short. Instead of fireworks, in 1979 luminaries were placed along waterfronts around the pond to create a "Ring of Fire" – a quiet, almost reverent change from the overhead explosions of the past. This custom continued over the years with moderate participation, but then in 1985, Dwight Coffrin, who worked for NorthStar Fireworks, offered his services and the more traditional fireworks were resumed. The results were proclaimed "spectacular!" and the donation jar was set out again at Hastings Store.

​State and federal regulations a few years ago required a change in setup location to insure safety of property, so now the fireworks are set off from the old railroad bed at the north end of the pond. There must be professional licensed technicians setting up for the show, and that takes hours using thousands of dollars of fireworks. Member donations and proceeds from the Joe’s Pond Ice-Out Contest cover the cost, and with luminaries still displayed along waterfronts of many cottages, the overall show is dramatic