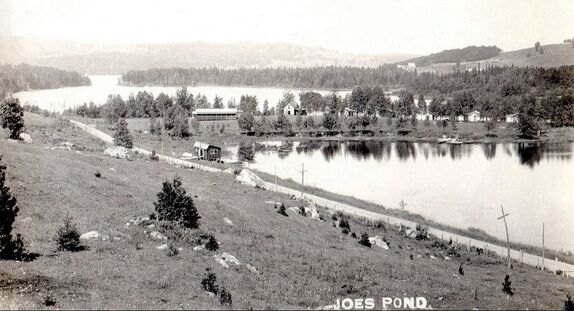 According to the Vermont Department of Water Resources, the "Joe's Pond Basin" was formed during the Pleistocene glaciations under stagnating ice conditions. Research shows it is likely that before this period, Joe's Pond did not exist and the stream flowed southwesterly to the Winooski Drainage Basin. As the ice advanced, it scoured deeply into the basin, and stagnating ice blocked a spillway through the ridge where West Danville and the present outlet is now.

Joe's Pond is at an elevation of 1,551 feet and covers an area of approximately 393 acres. Its maximum depth is about 100 feet. It is three miles long and at its widest, three-quarters of a mile across. According to the Gazetteer of Caledonia and Essex Counties, 1764-1887, Joe's Pond has its origin in brooks and springs on surrounding hills connecting to Cole's Pond and Lyford's Pond in the Town of Walden. It flows south east into Joe's Brook, known by early settlers as "Merritt's River", and a "never failing sheet of water falls 75 feet over limestone ledge", to the Passumpsic River, into the Connecticut River, and finally to the Atlantic Ocean.

The Gazetteer reports there was "an abundance and superior quality of trout" in Joe's Pond until around 1862, when "some spirited scamp" dumped pike, suckers, and other unwanted fish into Lyford Pond. After that, the fishing at Joe's Pond was gone. However, when cottages began to be built around the lake, some individuals and later the Joe's Pond Association stocked the pond with fish. The State of Vermont now stocks it regularly.

The Indians named this body of water "Sozap Nebees" (Sozap is Abnaki for Joseph, Nebees means pond, or stream of water). On June 11, 1785, the Vermont Legislature officially named Joe's Pond and neighboring Molly's Pond for the Micmac Indians, Joe and his wife Molly, in recognition of Joe's assistance to the early settlers in this region. Joe and Molly spent their summers hunting and fishing around Joe's Pond. In the winter, they would generally go south to live at the Ox Bow in Newbury among the Coosuck Indians there. It is said Joe was restless and often left Molly for long periods to hunt and act as scout for Generals Jacob Bayley and John Hazen during the Canadian campaign at the time the military road was being surveyed and built (1775-1776). The early settlers learned survival skills from Joe and Molly, and the two Indians had many friends. The Vermont Legislature awarded Indian Joe a small pension for his assistance over the years. 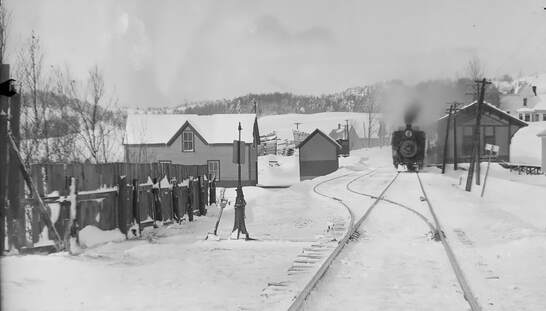 The towns of Cabot and Danville were granted in the 1780's, and Jesse Levenworth was one of the first to settle here, establishing a mill on the outlet of Joe's Pond. Levenworth believed the land was part of the Town of Cabot, but after being officially surveyed in 1787, it was found to be in the western part of Danville. The outlet of the pond afforded abundant water power, and the community known then as the Palmer Mill Village, after William Palmer who owned some mills and a great deal of the land, quickly developed. Once the railroad line from St. Johnsbury to Swanton was completed in 1877, the area became a center of commerce and industry with farmers and manufacturers sending their products to the cities of St. Johnsbury, Boston and New York by rail. The railroad also made Joe's Pond more attractive as a summer resort. By 1887, West Danville had a sash and blind factory, a gristmill, sawmill, two stores, several hotels, a blacksmith and repair shop, and scores of other buildings including a school and church, a granite shed, and a busy railroad station where the public beach is now.

Cottages began to appear on the shores of the pond in the late 1800's, early 1900's, and entire families came to spend the summers. The first cottage was built on Flint's Point by Henry and John Beck in 1897 on land purchased from Oramel B. Flint. There was also a dance hall and store on Flint's Point, where our Recreation Area is now.

At the corner of Route 2 and West Shore Road, the Blackadar family sold produce at their farm, as did the Osgood family on the upper side of Route 2. There was a popular boat livery opposite Gossholm, now the Cobb-Gruggel cottage, and on Route 2, Point Comfort once included a large dance pavilion, as well as gas pumps, cabins, and later a restaurant. Paving on Route 2 from Danville to the Cabot line was completed in the fall of 1927, and Point Comfort hosted a huge celebration.

The big island was known as "Tara" when Annie and Homer Richardson built the first buildings there in the early 1900's. The island passed to Fr. Druin in 1916, and a small chapel was erected. When Fr. Druin died, the island went to the Sisters of Charity, a St. Johnsbury Hospital order. A series of owners came after the Catholic nuns, among them Max Mann from Barre, Stephen Mayham, Beulah and Ellery Palmer, Arthur and Marian Luce, and, in 1976, Robert and Marty Lockwood. The island is now owned by Abel and Kitty Toll of Danville, Vermont. The island was commonly called Priests' Island when Fr. Druin owned it. Sometime between 1947 and 1955, electricity and telephone services were installed underground to the island.

The small island, known as Joe's Island, was literally built by Simeon Whittier. Sim had grown up in the area of Cabot, and just before the turn of the century, after serving at Little Big Horn under General Custer and later a stint with the French navy, he returned to Joe's Pond. Sim brought stones and soil in his rowboat from the mainland to build his island around an existing ledge. He was expert at many things, including paperhanger, plasterer, boat repairman and rope splicer - even baby sitter and poet. Sim died in 1937 at 87 years. He spent nearly 40 years on his island, sometimes spending the winter there. The little house he built on the island was eventually moved on the ice in the 1940's and is now part of the cottage on West Shore Road owned by Marlyn Rouleau. This cottage has been replaced by a more modern structure and located closer to West Shore Rd.  Liz Pearl Sargent and Henry Pearl (descendants of Wm & Lucia Pearl) now owns the island.

There have been tragedies at Joe's Pond. Over the years there have been several drownings, a serious speedboat accident when Jerry True, (who had been sitting on the bow of a boat) was thrown out and run over by the propeller, and close calls that fortunately didn't result in injury. An airplane went down near Gossholm on the narrows, but was retrieved and no one was hurt. ​
​
NOTE: Resources for more detailed information on Joe's Pond are: Indian Joe The Friendly Indian Guide, Indian Joe The Famous Abenaki, and Molly Squaw of Indian Joe, all by William Parker Neal and available at Hasting's Store in West Danville; Village in the Hills: A History of Danville, Vermont 1786-1995, by Susannah Clifford for the Danville History Committee in 1995; Cabot, Vermont A Collection of Memories From The Century Past, published by the Cabot Oral History Committee in 1999; and A History of Walden, Vermont, Compiled by the History Committee of Walden, 1986, Revised Edition 1990, all available at your public libraries.

NOTE: A much more detailed history of Joe's Pond and the surrounding communities, can be found in "West Danville, Vermont, Then and Now, 1781-2021," written by the late Dorothy Larrabee, Patty Conly, and Jane Brown, and published in 2021 by the Danville Historical Society, 121 Hill Street, Danville, Vermont 05828.