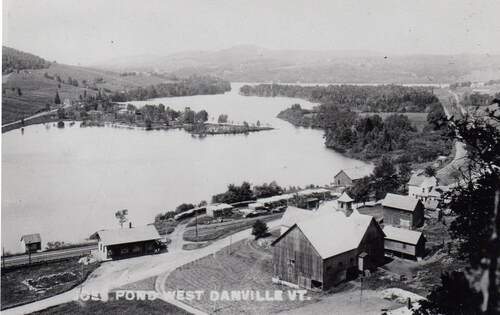 The Lone Sentry of West Danville
Jane Brown
(Published on May 20, 1997, the Caledonian-Record)

Sometimes the things we see every day become so commonplace that we forget to wonder. For instance, have you wondered about the Lone Sentry statue that stands solemnly by the footbridge in West Danville?

It wasn't planned that this incomplete carving of a Civil War soldier would become the sentinel of Joe's Pond. It's probable that the statue was ordered sometime around the turn of the century by the Grand Army of the Republic.

The G.A.R. was founded in the winter of 1865-66 by veterans of the Civil War to commemorate their dead comrades. They established homes for old soldiers and provided assistances for orphans left behind. In 1868, the G.A.R. instituted Memorial Day. Soon, G.A.R. auxiliary groups sprang up, such as the Woman's Relief Corps, the Ladies of the G.A.R., and the Sons and Daughters of Union Veterans.

During the late 1800s and early 1900s, when membership was at its peak, the G.A.R. erected memorial statues to commemorate fallen comrades. West Danville's statue of a Civil War soldier was without a doubt to have been such a tribute. However, fate intervenes.

It would have been during this time that Edward Ayer was a stonecutter in West Danville. Edward was born on Feb. 13, 1863, and grew up in Lyndon. As a young man, he moved to Barre to learn the trade of stonecutting. Edward married Alice White of St. Johnsbury in 1892 and two years later moved to West Danville. Settling in a farm across the road from the stone sheds, Edward and Alice raised a family of six children: Vera, Edna, Mary, George (who died in infancy), Oscar and Otis.

The stone shed where Edward worked was at the north end of West Danville village, just beyond the railroad station, at the far end of what is now the public beach. The shed was first owned by Wilcox and Clifford, then Wilcox and Armstrong, and finally Goss and Conly. Edward worked for Ashley Goss.

One of the projects Edward was assigned was a statue of a Civil War soldier, likely an order placed by the G.A.R. As work progressed and he started on the rather delicate carving of the cap's visor, disaster struck. A flaw in the granite, a slip of a tool, an accidental hit - we'll never know for certain - but a piece broke off and the statue was ruined. The big block of granite was hauled outside and Edward began anew. Natalie Capron of Springfield, Edward's granddaughter, remembers going to the stone shed with her grandfather and seeing the statue by the door. "He told me it had to be discarded because of a piece breaking off," she recalled. "When Mr. Goss gave up his business, my father, Earl Rodger, purchased the building and had it moved to his garage where it was used as a storage building. The statue was left at the pond." Edward retired from stonecutting in 1911, due to ill health. He was a farmer until he died of "stonecutter's consumption" in 1930. 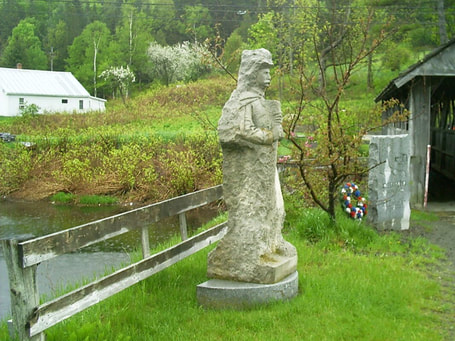 Grandchildren Dorothy Larrabee, Richard Ayer and Barbara Emmons, now all living in Danville, remember playing around the statue and climbing over it as it lay partially submerged in water and sand at the edge of the pond. When the public beach was created in the 1950s, the statue was shoved aside and forgotten. But Edward Ayer's family didn't forget.

"My father kept mentioning the statue," Dorothy said, "and one Sunday morning, my husband lifted it out with a forklift and set it in front of our building supply." At that time, Larrabee's Building Supply was located in the old schoolhouse across from the beach.

After its rescue by Buddy Larrabee, Leo Buttura, a long-time summer resident at Joe's Pond and owner of Buttura Granite in Barre, pointed out that the statue needed a proper base. He brought one from his stoneshed in Barre and the Lone Sentinel was placed upon it. The statue remained there until Larrabee's business moved to Route 2 between West Danville and Danville in 1995.

The stoneshed where Edward had worked that was later moved to be used as a storage shed was torn down around 1976. The lumber was used to build a new footbridge across the outlet of the pond near the dam. When Larrabee's Building Supply moved, Dick Larrabee and Mark Dunbar used Dunbar's logging equipment to move the statue to its present location by the footbridge.

"Thus the building and the statue were re-united!" Natalie said.

While nobody knows for certain who ordered the statue Edward was carving, it seems safe to assume that it was the G.A.R. A very similar monument stands on the village common in Lunenburg. Judy Young of the Lunenburg Historical Society said their statue was appraised in 1996 by a Washington, D.C. organization "Save Outdoor Sculpture (SOS)."

While SOS listed the artist and maker "unknown," Lunenburg's statue is about the same size - approximately life-size - and has the same features as does West Danville's sentinel. Installed in 1904 and commemorating the soldiers of the Civil War, the statue in Lunenburg may be the one Edward Ayer carved to replace the one now gracing West Danville's Memorial Park.

The G.A.R. placed many similar statues throughout the country. In St. Johnsbury's Mt. Pleasant Cemetery, there stands another beautifully carved Civil War soldier. The lot upon which he stands was donated to the G.A.R. by the St. Johnsbury Cemetery Association in 1866. Four small markers in this spacious spot bear the names of fallen soldiers. Other similar monuments in such places as Coventry and Johnson vary somewhat in appearance, depending upon the artist who created them. What was probably an unfortunate occurrence for Edward Ayer turned out to be a treasure for the Town of West Danville. Even though unfinished and with a flaw, the statue is a splendid example of his artistry. Were it not for a handful of caring people, the Lone Sentinel might still be buried in the sand at the edge of the pond.